The new smart management system is part of a set of measures that can reduce water expenditure up to 80 percent, aiming at sustainability and climate change adaptation.

Infraquinta presented this Tuesday the new IQ Efficient Watering System already implemented in the nearly 13 hectares of Quinta do Lago’s public green spaces. This new technology implementation, combined with a set of numerous other investments, have allowed the municipal company to reduce its irrigation consumption needs in 50 and 80 percent in some areas.

Rega IQ (efficient watering system) comes as a result all the measures carried out by Infraquinta in accordance with the strategy of Loule’s Municipality for climate change adaptation and water use sustainability.

Among the measures adopted over the past year are the reduction of lawn used in landscaping and the preference for indigenous plants more resilient to drought periods in landscaped areas. By changing the components of these spaces and with implementation of the new efficient watering system, Infraquinta can extensively reduce its irrigation water consumption.

“The landscaping requalification of several spaces, namely the 1st roundabout (Avenida Ayrton Senna) or Valverde’s Garden, have already allowed for a 83 and 56 percent reduction”, said Miguel Piedade, Infraquinta’s Chairman of the Board of Directors, during the presentation of this new IQ watering system.

With Rega IQ system, all the water used for irrigation purposes will be monitored, analysed, controlled and managed remotely using any device with an internet connection (mobile phone, tablet or computer), according to the weather data previously analysed, such as humidity, wind direction and intensity, temperature, UV index and pluviosity.

This data collection is carried out through a system of WiFI 3G reception stations, powered by solar energy and 115 controllers and sensors distributed across the green spaces. Besides controlling the necessary water quantity, the system also allows to monitor the water origin, detects anomalies, such as equipment malfunction, low battery or disruptions.

The implementation of this system will further allow Infraquinta to significantly reduce its energy costs and water consumption - since 2015 Infraquint has the lowest water rate loss in Portugal. 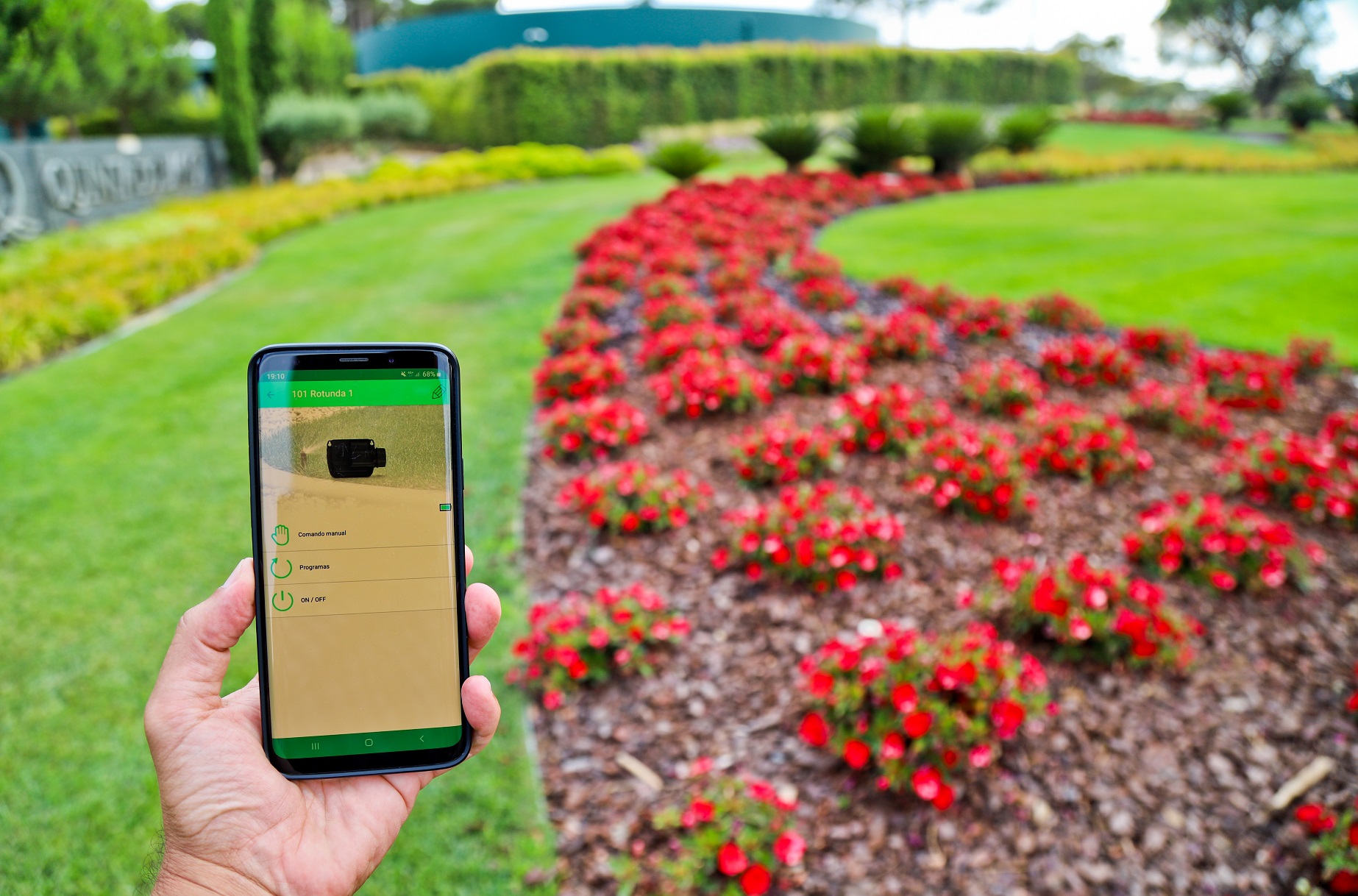 In addition, the information provided by Infraquinta’s weather station, installed in Quinta do Lago since 2015, will be available in real-time, so that in the near future, the interconnection of these data and the owner’s irrigation system allow owners to remotely manage their green spaces, for better water usage.

“Water, whatever its source, is a scarce resource and it’s imperative to fight its waste. In Infraquinta we’re already doing it as users and the challenge is to raise awareness among our clients, those who use and buy water or have water boreholes, so they too can minimize water waste.”, said Miguel Piedade, Infraquinta’s Chairman of the Board of Directors.

Attending to Rega IQ presentation ceremony were Cláudio Lampreia (Infraquinta’s Landscaping Department Director), João Henseler (Aquamatic’s responsible) and the Loulé’s City Council vice president Pedro Pimpão, who acknowledged Infraquinta’s work, by adopting an action that can translate in “technical know-how for efficient water usages in terms of water that can be implemented in other territories of the council.”

“It’s a huge challenge because we’re no longer living in an environmental impact minimization, but rather in a climacteric emergency, as Loule’s City Mayor says [Vitor Aleixo]. What we’re experiencing, year after year is an increase of population needs when it comes to water usage, therefore, it should be rationalized the best way possible without compromising people’s lives and organization lifestyles and routines. We must rationalize so that, in the future, we don’t have to deal with dramatic situations”, said the Vice President.